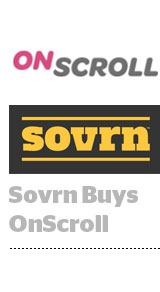 Sovrn plans to deploy the technology across the 80,000 publishers in its network, according to CEO Walter Knapp. OnScroll creates highly viewable ad units for publishers by analyzing user behavior patterns.

So if a user usually scrolls to the bottom of the page, OnScroll will serve a below-the-fold placement. That increases overall ad inventory by 7% to 15%.

Because Sovrn’s mostly long-tail publishers don’t have the resources to redesign for viewability, such as “lazy loading” ads that only serve when they’re in view, OnScroll will enable its publishers to quickly improve their viewability averages.

Knapp added that since current RTB protocols don’t pass viewability data well in the open exchange, Sovrn will reach out to DSPs and agency trading desks to set up private marketplaces that meet high viewability thresholds, including both the IAB standard (50% pixels in view for one second) and the higher one set by GroupM (100% pixels in view for any length of time).

Furthermore OnScroll, which is used by 1,000 sites across 60 publishers in the UK and Europe, will help Boulder, Colo.-based Sovrn gain a European foothold, initially in the UK.

OnScroll’s dozen employees will be rolled into Sovrn and will continue product development. Its co-founder, Andy Evans, predicted OnScroll will be able to develop time-based and engagement-based measurement for advertisers, similar to what the Financial Times and The Economist have been doing.

“Those experiments are early, but we are looking at that as an interesting place to go next,” Knapp said.

The acquisition brings to light some details about Sovrn’s financial position.

It raised $10 million last year to fund acquisitions and had another $10 million in reserve. According to Knapp, those funds are still largely in place post-acquisition.

The company is focused on profitability. Sovrn was profitable in the past six quarters, Knapp said, making Sovrn part of the trend in ad tech seeing companies push for profitability, not just growth.

Knapp expects Sovrn’s publishers to incorporate OnScroll’s solution by the end of the second quarter.