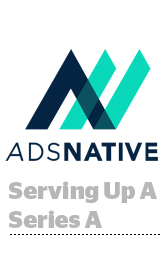 AdsNative added $8.5 million in Series A funding to its war chest on Thursday as it moves to offer an alternative to the market’s dominant ad server.

AdsNative’s solution combines a native, mobile-optimized ad server with the option to add on a yield optimizer and exchange. By solving for publisher problems capturing mobile and native ad revenue on their sites, AdsNative aims to woo publishers away from the widely used ad server, Google-owned DoubleClick for Publishers [DFP].

The technology comes with a bonus that has grown increasingly valuable in today’s changing marketplace: immunity to ad blocking. Ads load in the same place as content, so AdsNative’s solution doesn’t make outside ad calls the way DFP does. Ads blend in with the content both visually and technologically, making ads served using its tech much harder for ad blockers to stop.

But that wasn’t the original intention behind the technology.

“The motivation was not to bypass ad blocking,” Polisetti said. “It was how quickly we can make ads load on the page and ensure the publisher had complete control over the experience.”

In the two and a half years since AdsNative was founded, it has signed up clients like ABC News, Politico, The Seattle Times, Reuters, Disqus and We Heart It. It has greater success with newer companies or those with a strong business case to create native ads. Getting more established publishers to switch from the dominant platform, DFP, is a “slow” process, Polisetti said.

Some clients, including We Heart It and Disqus, use AdsNative’s ad-serving technology to create their own native ads, without all the legwork required of doing it themselves.

Rakuten Ventures and Interwest Partners led the Series A round, with support from Onset Ventures. AdsNative will devote the funds to adding more publishers seeking software-as-a-service, enterprise-level ad-serving solutions. It charges monthly fees according to how many impressions flow through the platform.

AdsNative already has traction, with about 4 billion ad requests a month flowing through the platform, Polisetti said. So far, revenue this year has tripled the total for 2014.

Besides attracting more clients to its ad server, AdsNative will expand its presence in Asia. It also plans to “double down on mobile,” Polisetti said, with a goal to increase the platform’s presence on mobile. Right now, it’s on the cusp, with mobile accounting for 45% usage and rest coming from desktop.

Eventually, though, it may expand to serve native ad experiences everywhere.

“Publishers are all becoming multichannel,” Polisetti said. “Content lives not just on the dot-com, but on Snapchat, Facebook Instant Articles and Apple News.”

Down the road, AdsNative will expand its capabilities to serve ads on these outside experiences.

“The future of ad serving,” he said, “will be about the seamless integration of content and advertising.”