Rubicon Project Turns A Profit On $1 Billion In Managed Revenue 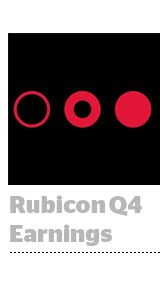 The amount Rubicon takes from transactions on its exchange increased from 19.3% in Q4 of 2014 to 24.9% in Q4 of 2015. The company said that was due to an increase in RTB impressions and a shift away from static impressions, which represent its older ad network management business.

The higher take rate also comes from the integration of Chango, a retargeting company with high margins. But in an earnings call, Rubicon President Greg Raifman said, “[A]s we start to move to a more transparent buying structure [for Chango], we think the take rates will go down.”

The climbing take rate this year belies previous comments Rubicon has made about the expected trajectory of its take rate.

It has said in the past that as its orders business grows, its take rate should decrease since the higher-priced private marketplace and automated guaranteed transactions have lower take rates. That’s still the case, according to Rubicon leadership. But it may not happen as fast as expected.

While the orders business grew from 13% to 18% of Rubicon’s managed revenue, mobile took off at a faster clip. It grew from 20% to 31% of managed revenue. All of the top 50 advertisers on Rubicon’s platform bought on mobile and desktop on Cyber Monday. On the publisher side, 84% of the top 100 sellers sold cross-channel through Rubicon in Q4, compared to 65% last year.

Rubicon Project also shared metrics that serve as proxies for the health and quality of its exchange. CPMs grew from $0.67 in 2014 to $1.09 in 2015, a 62% increase. Impression volume decreased slightly, from 999 billion in 2014 to 920 billion in 2015, the result of “a shift from static [ad network] inventory to RTB inventory,” according to a company statement.

Compare that to AppNexus, which is farther behind in policing quality and fraud in its exchange. It recently released stats showing a 90% drop in volume, while CPMs rose more than 500% (higher than what Rubicon is reporting) after it took actions to clean up its exchange.

Rubicon reported a Q4 profit of $20.4 million and a full-year profit of $400,000, which is its first-ever annual profit. Rubicon’s “consistent strong performance comes at a time that others in our sector have struggled,” Raifman said, noting that Rubicon's performance is on par with other industry leaders, such as Criteo, which also had a 50%-plus growth rate in 2015, as well as Google and Facebook, both of which had EBITDA margins greater than 20%.

Next year, Rubicon expects growth to slow, though it didn’t fully take into account its strong Q4. Full-year GAAP revenue is expected to range from $315 million to $355 million; the midpoint between the two numbers – $335 million – would represent a 35% increase. Compared to its GAAP revenue of $248 million in 2014, that's a 98% increase year over year.