Revcontent Signs Newsweek As It Eyes Taboola And Outbrain 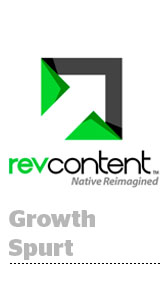 The news follows the Jan. 8 announcement that it had acquired ContentClick, a European native advertising network, to gain a foothold in that continent.

In tests, Revcontent tripled the returns it was getting from Taboola, said Etienne Uzac, CEO of parent company IBT Media.

Revcontent CEO John Lemp said its technology generally outperform other content recommendation players by two to three times in split testing, and the lowest he’s seen is a 50% improvement. Its algorithm is slower to learn than its competitors’ and needs a larger sample size, he said, but yields great returns for publishers with more than 100 million impressions a month.

Lemp described Revcontent as a latecomer to the space that’s been able to build leaner and more innovative technology. It was founded in 2013.

Brands advertising with Revcontent have the ability to retarget audiences. The content recommendation engine also offers brands transparency into which of the 700-plus publishers on Revcontent they are running on.

A strong mobile base may help Revcontent gain further market share as publisher traffic shifts to mobile. It’s been devoting development resources to smaller units that work better on mobile screens, as well as changing interfaces depending on what mobile OS a user is running, for example.

The Sarasota, Fla.-based company employs 130 people, and 15 more will be added as part of the ContentClick acquisition, as well as an office in England, its third after its Florida and New York City offices. Lemp anticipates Revcontent will pass the $1 million-a-day revenue mark in coming months, and he said the company is profitable. It’s never raised money, and it funded the ContentClick acquisition with cash.

Besides trying to differentiate on technology, Revcontent said it’s trying to build up a quality network. Although Lemp acknowledged the network isn’t perfect, he said it rejects over 90% of publishers who apply to be part of Revcontent and offers image-detection technology to screen out objectionable content.

“The two main players in the market have not given targeting or control to advertisers or publishers. That becomes a race to the bottom in terms of ad fill,” Lemp said. “If you give advertisers the ability to create content that goes to a particular audience, that gets exciting, but it takes time for that marketplace to build up.”