Home Blog PubMatic Lays Off More Than 100, Plans To Refocus On Large Customers

PubMatic Lays Off More Than 100, Plans To Refocus On Large Customers 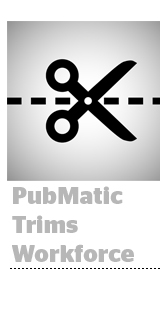 The layoffs, affecting 20% of the company's global staff, follow an 8% reduction in October. The combined cuts have reduced PubMatic’s workforce from 600 to about 450.

Additionally the company lost two key leaders on the publisher and demand side: Evan Adlman, VP of publisher development, and Diane Malloy, VP of global media solutions, both left for new positions prior to the layoffs.

Speaking with AdExchanger, CEO Rajeev Goel stressed the layoffs “came from a place of strength.” He said the company plans to refocus on clients that drive the most value.

“We saw a minority of publisher customers represent 90% of our revenue,” Goel said. “We’re doubling down on the minority of customers who are poised to grow with us.”

On the plus side, PubMatic has been profitable for the past three years. To continue growth and serve its customers, Goel said he had to course correct and lay off staff.

But a source close to PubMatic said that although the company had been first to market with multiple products, including an early lead on RTB and header bidding, ongoing struggles with execution, marketing and leadership have hamstrung its growth and allowed competitors to pull ahead.

In addition to those company-specific issues, it’s a tough time to be a SSP (or a DSP, as demonstrated by buy-side platform Turn's recent cuts). Most publisher platforms have limited unique demand. Additionally, publisher tool sets can feel interchangeable.

“In this market, where there are no longer exclusive publisher relationships and supply can be found all exchanges, how do these companies survive?” said the source, who declined to be named because of ties to the company.

SSPs are pursuing a range of tactics to bring in high-quality demand. In the case of PubMatic, the company plans to hire salespeople to drive adoption of its buyer media console among agencies and trading desks.

Goel said use of the buyer console increased 50% year over year. Private marketplace activity, which takes place through the console, increased 30% from the first half to the second half of the year.

Among the layoffs are some client operations staff, including workers in India. Goel concluded it’s better to have client-facing employees located near the publishers they serve. About two-thirds of both rounds of layoffs affected India-located workers. The company has 200 employees remaining there.

Layoffs sometimes prep a company for a sale, but Goel said that’s not what he has in mind.

“I’ve never felt any pressure from my investors for timing for an exit,” he said. Because PubMatic is profitable, it doesn’t need to raise more money and still has access to additional capital if needed, he said.

With a reduced headcount, PubMatic may still have a shot, the source said. “This could be a new lease on life for them. I think they do have a future, if they can focus on [unique publisher tools], where they’ve had some industry-leading capabilities.”

In February, PubMatic put its publisher count at 372, and Goel said the number has grown since then. He insisted the company has not lost traction in the US market, and said it continues to grow internationally.

Correction: An earlier version stated that the departures of Adlman and Malloy were part of the layoffs. Instead the two executives left earlier.