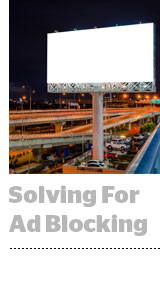 While publishers combatting the rise of ad blocking can select from a growing number of vendors who address the issue, many of the available solutions are largely the same.

One group of offerings is designed to change user behavior. There are generally four methods: asking users to turn off ad blockers, blocking content when ad blockers are present, asking users to pay for content and, finally, gating content until users watch a video or choose what kind of ads they want to see.

Ad-recovery tools are designed to avoid the block list of the most popular ad blocker, Adblock Plus. These tools either rotate domains or encrypt the ad call.

Tackling the problem since: Early 2014, though the tech has been in the works since 2012.

The backstory: While working in the video game industry in 2010, PageFair CEO Sean Blanchfield noticed that one-third of users used ad blockers, what he called the “canary in a coal mine.” After watching the issue for a couple years, he and his two co-founders took action. First, PageFair developed analytics to measure the ad-blocking issue. Then it moved to messaging ad-blocking users, but decided that since only a limited number of people unblock, it wasn’t enough. PageFair shifted focus to ad recovery, or getting ads past ad-blocking users. The technology brings in demand from both programmatic and direct-sold channels.

Revenue model: Free analytics, and a flat CPM fee for ads recovered through its process.

Works on: Desktop display. Not on video because “we’re trying to stay away from problem formats,” Blanchfield said. Mobile is “in the works.”

Solutions offered: Analytics to measure ad blocking, and technology that restores ads to ad-blocking users through its network of acceptable ads. “Advertisers should want to pay more to advertise to users in a respectful and controlled environment,” Blanchfield said.

Notable tech: While most companies constantly change domain names to outwit Adblock Plus, PageFair “makes the ad serve as if it were a first-party ad from [a publisher’s] own ad server,” Blanchfield said. The networking and rendering make ads appear like content, and consequently evade detection by ad blockers.

What do you think of ad-blocking users?: Blanchfield said the concerns of ad-blocking users around privacy, poor experience and bandwidth are legitimate, and that informs what he calls PageFair’s “intensely pro-consumer” position. Hence, PageFair focuses on banner ads as opposed to unskippable pre-roll or formats users hate.

Tackling the problem since: March 2014

The backstory: Secret Media CEO Frédéric Montagnon saw that users were unwilling to pay for content. Others couldn’t unblock their content even if they wanted to, because their company or university blocked ads. He focused on adding video ads back, since it’s an important revenue stream for publishers.

Works on: Video ads, and expanding to other formats this year.

Notable tech: Ad recovery works by “encrypting every single element into tracking creative to make sure [ad blockers] never find a keyword or pattern into the URL or ad tag or code,” Montagnon said. Secret Media also recently signed a deal with Teads that will add outstream video back into ad-blocking users’ feeds.

What do you think of ad-blocking users?: “Ad blocking is a consequence of what the market has exposed to the user,” Montagnon said. “The problem is not ad blocking, it’s the user experience. We want the publisher to monetize their ad-blocking traffic, but first we want them to build a better experience.”

The backstory: CEO Ben Barokas wants to give users options, like paying for content or choosing what ad experience they prefer. This methodology might disrupt the popular model in which users get content only after viewing ads. “The ongoing problem is not ad blocking, it’s creating the next-generation media transaction engine, and how you exchange value with users long-term and cross-device,” Barokas said.

Solutions offered: Sourcepoint’s main offering asks users to unblock, and it will soon release one that requests users pay for content. But it also has ad-recovery options and analytics.

Notable tech: “We’re not there yet, but we want to customize an advertising experience for users that will last not just for that session, but travel” across the web, Barokas said. What might that look like? “It’s difficult to sell an ad-free experience on one or two sites, but we think there is a large opportunity across hundred if not thousands of sites.”

What do you think of ad-blocking users?: Barokas wants to “educate users about what it means to have ad blocking on,” and follow that up with choices for how a user can offer value to the publisher and, in turn, advertisers.