We’re featuring a contributed post from AdPushup. They are an ad revenue optimization tool which helps publishers and bloggers make more money from their existing website traffic using advanced automated A/B testing without the need for any programming knowledge.

While most small businesses and individual bloggers probably don’t require an ad server as in most cases, ad networks would suffice, there are plenty of users ranging from marketers to large corporations who need it to gain better control over their advertisement campaigns. From tracking their ROI to visitor engagement, these eight ad servers represent the best of the 3rd party ad servers out there:

The first ad server on our list is most likely the best one out there with some really impressive features backing it up, and now that Google has bought DFP, it is firmly integrated into its advertising operations.

Google has even put out two different versions of this server, the small business, which caters to small-time users and is completely free of charge and the more robust, original DoubleClick for Publishers, which caters to all the larger publishers out there.

Whereas DFP is owned by Google, Atlas Solutions was acquired by Facebook to complement their already existing Facebook advertising platform. And it does that really nicely, considering the set of features you find in this ad server. These features include advanced statistics, demographic customer targeting, and cross-device advertising.

Pitting itself against the other ad servers at the fight for podium placement, OpenX is a highly functional platform that also provides its users with a real-time auction of advertising space on reputable and famous publishers’ websites. 96 % of AdAge leading national advertisers use OpenX, and some of the companies that use OpenX are Electronic Arts, Samsung, and CBS Interactive.

While OpenX is widely used and recommended, from small businesses to mega brands and Forbes 500 companies, it doesn’t mean that it will cost you an arm and a leg. Quite the opposite, because you can start using it for free. 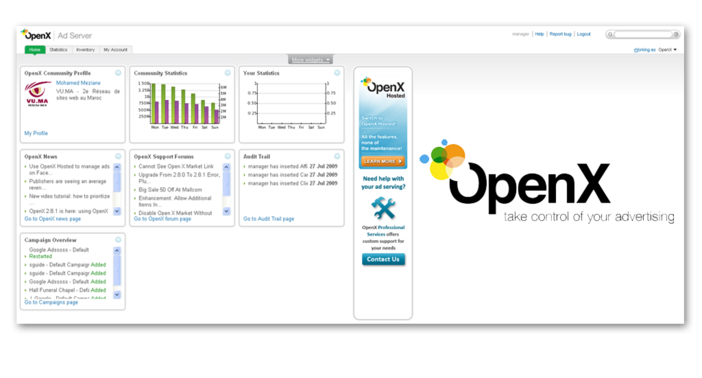 A small time ad server compared to the aforementioned top dogs of the industry, AdColt differentiates itself with an excellent fraud preventing mechanism that protects your money by detecting click fraud.

It also offers white label solutions and it is completely web based, so no software installations are necessary.

Armed with the title of being the fastest ad server in the market, AdZerk definitely gains interest as an alternative to the bigger and more seasoned players. Formed in 2010, it has already amassed some impressive clients such as Reddit, StackOverflow and Xconomy.

With features like allowing visitors to up- and downvote advertisements, AdZerk definitely differentiates itself from the crowd, and that is also the reason why Reddit ditched Google’s DoubleClick server and moved to use AdZerk in 2013.

Zedo was founded as early as 1999, and was also the first to come out with a self-service advertising module in multiple languages. Even today, it features the best direct sales tools in the market, so the age is not showing on it yet. Only a handful of ad servers have stayed at the top of their game as long as Zedo.

It has been criticised for providing pop-ups and pop-under ads to publishers, which irritate and provoke negative feelings in many visitors. It uses cookies to track the users’ search history to be able to direct the advertisements to the specific visitors.

AOL owned AdTech is geared for larger publishers and thus includes a learning curve that’s steeper than on many of the other ones. However, the rewards of riding out this learning curve are handsome, and even though AOL has lost its throne as the king of internet, AdTech still continues to fight for the top spot as an advertising server.

With excellent media management features to supplement the ad server technology, you can provide your visitors with video advertising in a cross-platform environment.  Founded in 1998 in Frankfurt, Germany, it is the only major ad server that can beat Zedo in terms of experience calculated by the years in the industry.

A rather small platform and an unknown name in the ad server game, Broadstreet is suited best for those smaller businesses and local news sites. It includes editable adverts, which could prove useful to many small business owners still testing out their advertising skills and techniques.

There’s not too much to tell about Broadstreet in comparison to the other large ad servers that have been around for years, or have acquired a client the size of Reddit in their third year of operation, but it does not mean it wouldn’t be a good choice as an ad server. The feedback from Broadstreet users has been extremely positive, and the team behind it has done a great job providing small businesses with an alternative to DoubleClick.

When looking for an ad server, keeping in mind your individual needs is very important. Many of the providers have different specialties, some offer small businesses a better starting point, some include media management in their repertoire, and some are powered by giants like Google and Facebook.

Keep your eyes peeled for user experiences from advertisers and publishers who have already dipped their feet into the ad server selection, and whether or not they are happy with the choices they made. Reading about ad server reviews is one thing, but getting information from someone who has first-hand experience of a provider is priceless.

Use the information here as a guide to narrow down your choices, and then when you feel ready, let the advertising begin.