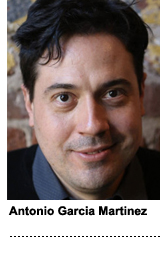 He also had a front-row seat when Facebook killed off the initiative, a decision that effectively aborted his future with the company, as he details in his tell-all book "Chaos Monkeys."

"I had bet my entire social capital and career at Facebook on pushing programmatic forward, and when that got shot down, I got shot down," Garcia Martinez says. "Facebook just never understood programmatic in a deep way, and they always mistrusted it. They didn't like that they didn't have complete control over everything in the ad stack. And they didn't like that companies like MediaMath, Turn and TellApart had as much control over ad delivery as itself."

AdExchanger: During your early days at Facebook, how did you come to the conclusion that the company's social data was low-value?

ANTONIO GARCIA MARTINEZ: In my role as product manager for ad targeting, one of the first things we did was to suck in every piece of Facebook user data – things like check-ins, links you shared, links you commented on, even texts and posts – and input that into the sausage grinder of the likes-and-interests targeting system.

It didn’t increase the click-through rate of ads targeted in that fashion. For example, if I want someone to engage with this content and hopefully buy something about golf, it was very hard to use Facebook data to do that. There were some small gains, a small increase in click-through rate. But it was nothing compared to using first-party data like what Google has or what an advertiser would have. And so, with a click-through rate already so low – I mean we’re talking sub-1% – it needed to be better.

How did those findings go over with management?

With companies like Facebook, the product mythologies just kind of appear, and if you contradict them you seem heretical. Saying that Facebook's data was more or less useless, even though people might’ve intellectually understood it, doesn't mean the internal mythology changed.

Did this make you unpopular?

Less than what came later. Pushing the programmatic versus the nonprogrammatic vision made me a lot more unpopular because I was a lot louder about it.

What gave rise to the programmatic discussion at Facebook?

A lot of that was driven by aspiration around the IPO. Facebook’s revenue growth was slowing. … Gokul [Rajaram, Facebook's ads product director] would say, “We need new ideas to juice the IPO, what do we do?" Out of that chaos came Facebook Exchange, Custom Audiences and a bunch of other stuff.

How did FBX come together?

I don’t know if most people realize this, but FBX was just me and three other guys. That was it. I took some partners there and I showed them our three guys and they thought I was joking.

We were making it up as we went along because no one had ever made a social media feed-style format work with RTB. We shamelessly ripped off Google obviously. We didn’t invent the basics of RTB with Facebook. I was literally pulling up Google’s spec and reading through all of it and listing what was necessary and inventing what was new about the social media part of it, and that became FBX.

Then, in ad tech markets, everyone was like, “Holy shit! The walled garden suddenly has a gate in it, and the gate is programmatic and they’re obviously moving in our direction and everything is going to be great.”

Later some great expectations were crushed as FBX was not extended to mobile in a big way. Now Facebook is preparing to shut FBX down and a lot of its marketing partners could be shut out.

As I said in the book, Facebook doesn’t have partners. It has temporarily convenient companies to work with. It doesn’t care about anybody but itself. I would never partner with Facebook on anything.

Zach Coelius at Triggit is perhaps the most prominent example of someone who totally swung his company to focus on Facebook and nothing else, thinking it would be this big windfall. They were caught holding the bag. The book describes a meeting with Sheryl Sandberg where Facebook decides not to extend FBX to mobile and not to do identity matching on FBX, and that was the death knell for FBX.

But Facebook saw an opportunity to go direct to marketers rather than through intermediaries. Isn't that a smart strategy?

Yeah, of course, but they sucked. Facebook was acting like they had built a competitor to Criteo, which had been doing this for six years.

Other than Gokul, no one had worked in ads before. They literally had no clue what was considered a competitive ad product. We actually went out and got demos and saw how these tools worked. I don't think anyone had done that at Facebook before then. No one had ever paused to look at what a competing tool or service was like.

But you're right, from the point of view of Facebook, they might have been right to ship their own crappy product that they controlled rather than build an ecosystem or even a competing product that's as good.

Well, if it's still a crappy product when they shut down FBX later this year, they're going to lose revenue from sophisticated retargeters, right?

I've heard internally that it's only when Dynamic Product Ads (DPA) started taking off and beating FBX that they decided to shut down FBX and go all-in on DPA. I suspect they strong-armed all these retargeters and convinced them to use DPA and there's one guy holding on ferociously and refusing to change. I'm sure they looked at the numbers and decided it was worth it.

While you were at Facebook the company developed sort of a road map for social media monetization. First come branding formats, then performance-driven ads, then an ad tech partner program with APIs, then RTB support and so on. Pinterest, Twitter, Instagram and now Snapchat have followed this formula. My question is, how much was all that part of a grand plan at Facebook versus improvisational?

I don't think there's any long-range planning at Facebook at all. There's no five-year plan, at least not on the ads side. They try, but if something doesn't show an immediate result after a quarter or two, it gets killed. FBX almost got killed early on because it took a while to scale.

What Facebook really does well is it ships 10 shitty half-baked products, figures out the one that catches on, then doubles down like crazy and iterates it to its ultimate conclusion. That's the ad tech vision.

Facebook and Google have won massive market share in ad tech and digital media. Do you think ad tech is on the cusp of a major consolidation wave driven by this duopoly control?

I tend to think so. I got into ad tech for the reason everyone else did. It's how the internet gets paid for. But no ad tech companies actually make money. That's the paradox of ad tech. It's the money for the internet, and everybody is broke. It's clear that the money is all accruing to the publishers in some form or another.

Would you start a new ad tech company today?

If you gave me $10 million to start a company right now, I don't know what I'd spend it on. Until augmented reality and virtual reality and whatever ad eventually shows up in “Pokémon Go” come into play, I don't see a billion-dollar opportunity.