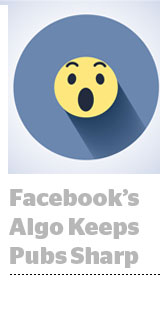 Facebook’s recent courtship of publishers – like its attempt to move them onto Instant Articles, paying them to produce Facebook Live videos and allowing the posting of sponsored posts on their feeds – hasn’t insulated publishers from Facebook’s algorithm adjustments.

On Wednesday, Facebook said it will change its algorithm to focus its news feed on friends and family posts. That includes articles friends share, but it will reduce the amount of posts from publishers that users follow.

“Audiences are still adapting to a world in which much if not most of their media consumption occurs within Facebook,” said Saul Leal, GM of FamilyShare, a social media-focused publisher owned by Deseret Digital Media. “Facebook must be seeing that audiences prefer a greater emphasis on friends-and-family content and responding to it. “

“I don’t see their push behind Live or Instant Articles before that in conflict with what they are doing right now,” said Regina Buckley, SVP of digital business development and operations at Time Inc. “In an evolving ecosystem, they are trying to maximize the time customers spend on the platform.”

All publishers AdExchanger interviewed were confident their content would perform well despite Facebook’s algorithm change.

The biggest risk is that reach for co-branded posts will decline, since advertisers like the higher distribution they get by piggybacking on publisher feeds.

Time Inc., which socially distributes its sponsored posts, said its co-branded posts could be affected. “It’s the quality of our content that will keep us in peoples’ feeds, and I feel the same way about our branded content,” Buckley said. “We work hard to make sure that it’s quality, and this underscores the importance of that.”

LittleThings revenue VP Justin Festa said many publishers see fewer interactions on co-branded posts. “If that continues to be the case, this algorithm change will impact those posts even more,” he said. A decline in organic reach may push publishers to pay to boost those posts.

Outside of branded posts, publishers were confident that their content would still receive generous distribution on the platform.

“This doesn’t present a huge concern for us,” said Vikki Neil, SVP and GM of digital brands for Scripps Networks Interactive. Scripps has the tools to adapt to algorithmic adjustments, citing both a “passionate fan base” and “analytical insights [that] are key elements in determining what we create and what works for our fans on Facebook.”

LittleThings says its inspirational content may benefit from the changes. “We think that because we produce uplifting, shareable content that people want to see, every time a change like this happens we don’t see the negative effects that other people see,” Festa said.

“If your social media strategy needs a major lift in light of these changes, you didn't have the right one to begin with,” he said.